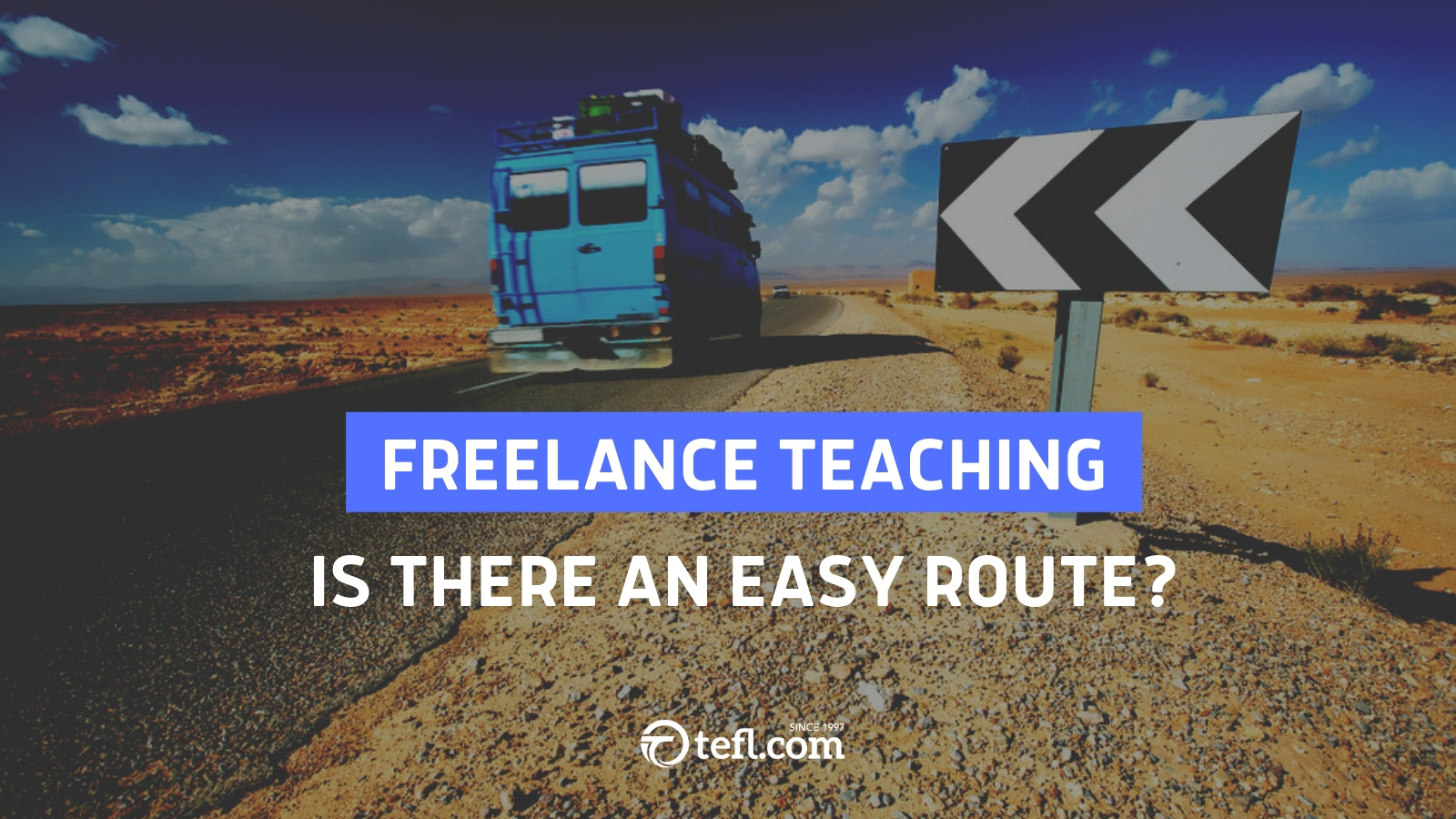 Freelance Teaching.. Is there an easy route?

The problem with being a Native English speaker is that, by and large, we have no idea how the English language works.

Oh, we know how to use it fine well, and we know when people are not using it correctly, we can even point out to those people how they should say what it is they are trying to say. What few of us can do though is to explain exactly why and how what they are saying is wrong; what they need to do to correct it and why; and all the rules that control usage and structure which they need to know, understand and be able to apply to be able to use good English.

The reason for this is that tuition in English Grammar all but dropped out of the primary and secondary school syllabus more than fifty years ago, and very few native English speaking people these days can describe even the basic parts of a sentence, never mind explain the rules that we use to tie them all together into sensible and meaningful structures.

How did you do? The fact is that, these days, many people have never even heard of the Gerund, and have no understanding that it is a very common part of our everyday language, and one we use many times a day, without realising that is what we are doing. They have probably heard of a Past Participle, but have no idea what a Present Participle might be.

Don’t take this the wrong way though. Do not think for a moment that Teaching English as a Foreign Language (TEFL) is simply a hyper-extended grammar lesson – that is about as far from the truth as it is possible to get.

We don’t teach our children to walk by telling them about the details of the human skeleton, the musculature that is attached to it, and the firing sequences in the brain that allow us to perambulate. Instead we hold out a favourite toy or a tasty tit-bit and encourage them to come and take it. Eventually, unsurprisingly, they succeed.

Equally, we don’t teach our children to talk by explaining the difference between the passive and the active voice. Instead we make repetitive sounds and encouraging movements – at first trying to get them to make any coherent sound at all (MahMah, for example, and DahDah.) After that we talk to them using gradually more structured word patterns, and introduce them to reading as early as possible – and it is from this they learn the word patterns we use.

And of course – they don’t learn the word patterns that we don’t use. So grammar is naturally self-sustaining – it doesn’t need to be taught to native speakers, they say what they say because that is what they have heard.

But what, you may ask, does all this have to do with being a freelance teacher?

The first thing to understand is that, although it is very possible to ‘drift’ into Teaching English as a Foreign Language (TEFL) it is not necessarily a good idea to try to build a career on that basis because, even as a casual freelancer, you will eventually be asked about your qualifications, and if you don’t have any - even if you have lots of experience - then many doors and avenues will be closed to you in the future.

A post-university wanderer, gets off a bright, shiny and ridiculously colourful bus and steps into a remote village somewhere in central Africa. She is tired, hungry, thirsty and in need of a good soak in a hot bath, but is immediately surrounded by the mandatory crowd of children, squealing and caterwauling in Swahili, mixed with more than a smattering of French and a few words of oddly pronounced English. Eventually some of the village elders wander up and shoo the kids away.

“Anglais! Zut Alors! Vien! Vien! Allons y.” replied the classically trained elder, leading her urgently towards a long low building on the edge of the village. At one end of the long hut is a small lean-to. The elder taps on its weathered and desiccated frame.

“Ndiyo?” comes a frail but determined voice from the depths  of the small cabin as the door opens and a tiny, brightly pink older woman emerges from the shadows within.

“Yes, I am English,” replied the young traveller.

“Oh well, we won’t hold that against you dear. Come away in Hen, and we’ll hae’ a cup o tea. And ye’ll be famished as like as not. I’ll get Chief Ironsides here to rustle us up some fodder. Set your pack doon there and grab a pew, til I get the tea on. My name’s Moira McEwan by the way, what’s your name dear?”

“Well, Sophie – Yer’ a sight for sore eyes, and that’s the truth. I’ve been here for 12 years and I never had a day off, not that I would know what to do with one if I did. Ye’ll be stayin’ a while I trust -  I could really be doing with some help and someone to have a decent natter with. Come away in.”

Eight weeks later Sophie Cavendish eventually left the village, having taken over the role of English Teacher, with no books or jotters or even a blackboard. This left Moira to focus even more on her French classes and her history classes and her equality classes and her social justice classes.

Sophie later got her TEFL qualifications and went back to Africa to teach English in more structured environments. And as for Moira, as far as anyone knows she is still there, teaching the children of that village everything, including at least a little bit of English.

So what does Sophie’s story have to do with being a Freelance English teacher?

The answer is simple – Sophie did it exactly the wrong way round. OK, it was the result of an accidental meeting somewhere in Central Africa which changed the course of Sophie’s life, but it is still the wrong way to do things. Get qualified first! In the end the recommendation for becoming a Freelance English Teacher is a very simple six step process.

Step 1. It is easy to become a qualified TEFL teacher so do that first, or if you accidentally get involved in TEFL teaching along the way, like Sophie, then as soon as you can, use that experience by applying it to obtaining a TEFL qualification. Becoming qualified is necessary to becoming successful.

Step 2. Once you are qualified, get a job in a TEFL school for at least a year. This will teach you much more than any TEFL qualification. TEFL teaches you about English and about teaching – working in a language school teaches you about people and about students, about how people learn and how people fail to learn.

Step 3. Become an expert in Lesson Planning and Lesson Content Development. When you work in a school they will usually provide you with everything you need to deliver a lesson. Freelancers have to do all of this themselves. The more expert you become the easier your Freelance life will be - and the better your lessons will be too.

Step 4. Learn to listen to your students’ language so that you can immediately determine what level they are at and where they need to improve. Never ask your students what they think they need in terms of English skills. Ask them about their life goals and then you tell them what they need to do to get there, at least as far as English is concerned.

Step 5. To make the leap to being a fulltime Freelancer build your local contact base, start doing some freelance work on the side, but DO NOT steal customers from your school, that is unethical. Encourage your students to recommend you to their friends as a private tutor, and try to gradually reduce class time at your school before taking the plunge and going fulltime Freelance.

Step 6. Go for broke. Leave your school and go fulltime freelance – but remember the three mantras of any service delivery job like this:

English teaching is not, on average, a particularly well paying job. (Though some Freelancers do make a great deal of money out of a few high-end clients.) However the important thing to understand is this.

In our little scenario, Moira allowed herself to get caught up in a bad position, and wound up doing her job for love more than money. That is not necessarily a bad thing, but you will never get rich that way. Sophie on the other hand took the opportunity to learn some important skills in a very difficult environment and then pulled out and went off to get properly trained and fully qualified.

Don’t worry too much about Sophie and Moira, they are mere figments of the imagination, but they do provide this important message.

If you want to become a successful freelance English teacher it is certainly possible, but it is not as easy as you might think. You need more than just talent and aptitude, you also need to possess a certain set of skills and a great depth of knowledge – the advice must therefore be - to make sure that you have those before you take the plunge. Get qualified!

Jock has spent most of his life wandering around the world, and is currently living in China again – this time in Shenzhen. A senior executive in various IT companies for several years, Jock specialises in teaching Business English.

Get your worldwide recognized, Via Lingua International TEFL certificate in this fascinating city and start teaching English wherever you like.

Prestigious, internationally recognised, 4 week, onsite, face-to-face intensive TESOL programme. Enroll on our first course in 2023 and get a special discount.