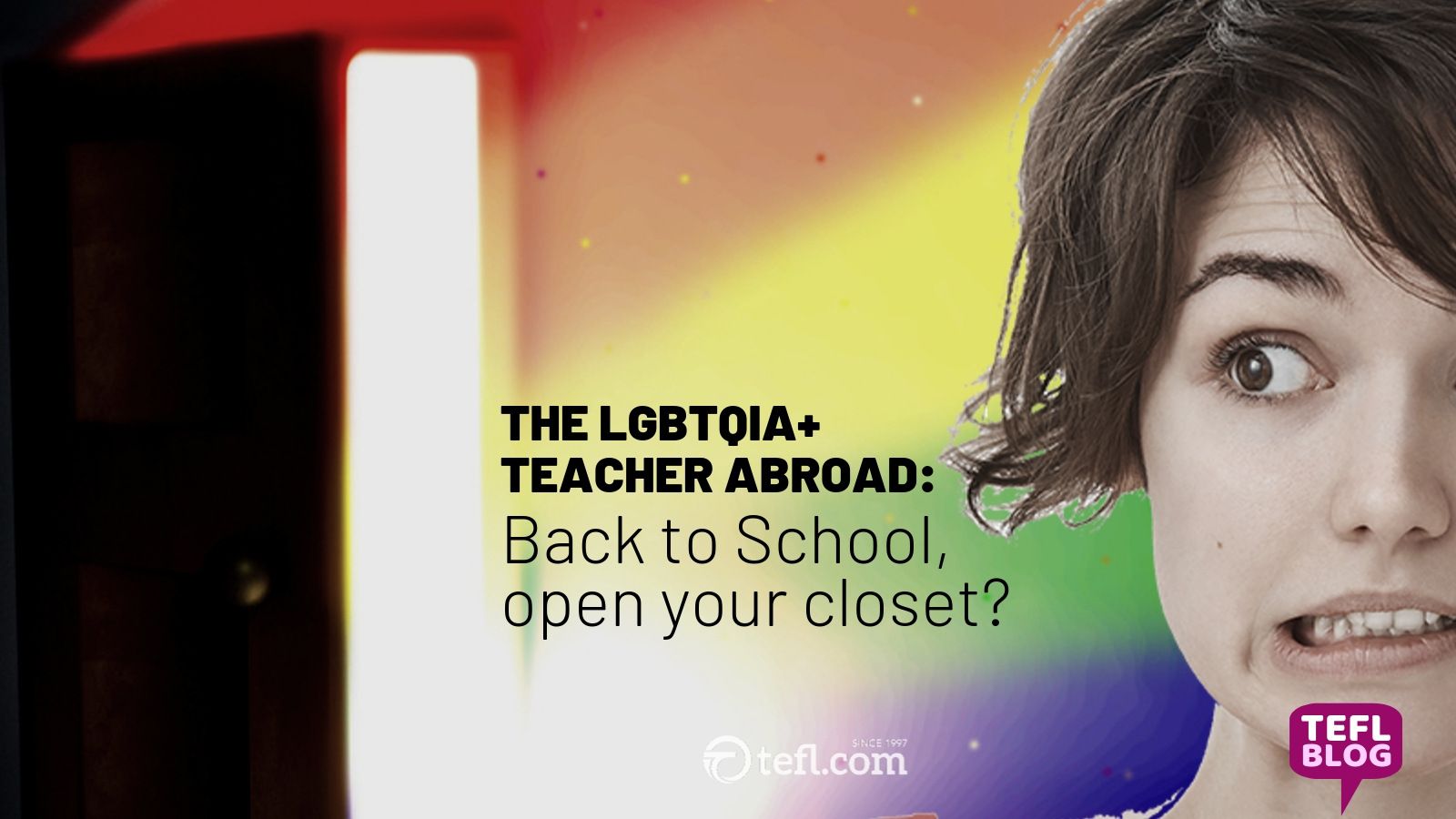 The LGBTQIA+ teacher abroad: Back to School, open your closet?

The faint sound of Christmas songs are around the corner, pumpkin spice lattes are in the shops, and the sound of children laughing in the streets is fading away. It can only mean one thing. The new academic year is here, in the northern hemisphere at least. This prompts teachers all around to ask themselves certain questions: where did the summer go? What reward system should I try this year? Which computer game DO I prefer fortnite or minecraft? How strict is too strict to start the year off? All equally important and valuable questions, but for the LGBTQIA+ teacher there are other questions you may be asking yourself. Questions such as, should I tell my colleagues straight away? Should I wait for them to ask me? Should I bring the topic up once I have had the chance to meet them? How do I bring up pronouns with students? It’s these questions I’d like to talk about today, but for the record I’m a minecraft person.

Before I start I would once again like to acknowledge that my experiences are mine and that I do not represent the entire community. Also it is important to recognize that I have a certain privilege here as these are questions I can ask myself. I ‘pass’, that is to say people do not look at me and assume anything about my sexuality. This is a good thing, and an irritating thing, but I do not underestimate my luck here. To this end I would love you to talk about your experiences below so I can learn too.

Over the past 7 years I have gone for a few different approaches, from awkwardly trying to avoid ever using any gendered pronouns; to the don’t ask don’t tell where I will never hide my sexuality but I will only tell you about it if you ask me a very direct question; or to the out and proud approach. I hope that by taking you through a few of my experiences I can prompt a conversation, and maybe this will help allies understand ways that they can help, but again I would love for people to comment about their experiences, or to ask questions below. We can only learn by listening to others.

That being said, let me walk you through the approaches I have taken recently. This is how it starts, someone says why do you live here? I say, well my partner and I were choosing where to move and… then the person says, ‘Oh, what does he do?’ This gives me a split second to make a decision, to lie or not to lie. This should be easy, and I am ashamed of myself that it is not. It involves a thousand considerations firing away in my brain in about 2 seconds. First, does this person seem like they would have a problem with me being gay. Second, if they did, would it impact on me in any way. Third, if it would impact me, would that be serious or not. Fourth, can I be bothered to correct them. Fifth is it rude if I just say SHE, does that make me the militant person? Sixth would I mind being the militant person… and on and on and on.

It should be easy it really should be … but it's not. You see life is full of experiences which shape the way we react to things. I like to think that perhaps it isn’t that I lack courage it’s just that I was raised by an incredibly polite family and I do not want to be rude and correct someone. I mean, I once spent an entire viola class being called Helen, because I did not have the heart to tell the teacher he had my name wrong. Although really I know that is not why I could get around that by saying, ‘oh she’s an aquaculturist’, in a neutral tone while praying that no one ever asks for any follow up on exactly what that is, as I have no idea.

So, if I can’t blame being too polite for my lack of courage, what can I blame? Well a few experiences come to mind. The first happened during my second full year as a teacher, I had moved from the small Andean town, which I will not name, to Santiago de Chile, an incredible place to live, I would highly recommend it. However my instinct for putting myself in somewhat uncomfortable situations has always been strong and therefore I had signed up to work in a Catholic University. I should have sensed this may not be the best place to be out when I read their ‘ethics’ paper which asked students to answer the following question: ‘Why can marriage between two men or two women never be considered to be a marriage?’.

Indeed for the first few months that I worked there it was a moot point, as I was still a little traumatized by what I had seen in the nameless town, so I was not even really out to myself,  until one day I was talking to a colleague, and I found myself telling her that perhaps I was interested in men and women. I do not know what it was about this colleague that made me feel safe, but there was a lack of judgement, a genuine interest in others, and the fact she allowed me space in the conversation to explain things. If anyone wants to help a friend they think is struggling, that is the best advice I can give. Make a safe space for them, show them you have no judgement and then leave time and space for them to talk.

After I told my colleague, I told a few friends, and then before I knew it, I found myself in a pretty serious relationship with a woman, and I felt unstoppable. It was an incredible time in my life, the birds sounded louder, the sky seemed brighter, the air felt crisper (which if you have lived in Santiago you know to be a rarity) it was incredible and so I made, what in retrospect was a grave error. I let people at work meet my girlfriend, and then my boss found out, and suddenly the job offer he had made to me and my colleague was taken back. Suddenly there were concerns about me, and suddenly it just wouldn’t work out, and suddenly even though my colleague and I had won a major teaching prize, we weren’t good enough. I found out later he had asked other teachers about whether I was dating a girl. He had said he was shocked because he thought perhaps something could have happened. This is all hearsay, and I could never prove anything, and I certainly would never have considered undertaking any kind of court case in a foreign country. So, I found other work, and I learnt my lesson, the world is not all good.

This early experiment with the out and proud model has shaped me, and perhaps it should not. I know that my favoured model of gender neutral pronouns and not talking about my private life is perhaps too difficult. You find yourself feeling on edge a lot. You find yourself never truly knowing other people, because they can not know you. Don’t get me wrong, we are talking about colleagues, so there is a need to be professional, and if we were in a more ‘normal’ profession it would be true that it is not necessarily the be all and end all that your co-workers ‘know your truth’. But, when you are in this profession, we are often far from home, and find ourselves building quick intense relationships with our co-workers, so much so that they begin to feel like a mini family. In this context a lie of omission, choosing not to correct someone's assumption feels like a bigger choice, and one which will have a much larger impact on your life.

The bottom line is that it sucks. It sucks that something I can’t change about myself, and something which I hope to be the sixteenth most interesting thing about myself, is the thing which may also make people hate me; may lead me to lose jobs or opportunities; and can cause this much stress. I started this by saying that I wanted to give some tips to allies, on how to be the best ally you can be, and though it may seem more like a long meandering trip down my memory lane it was all to make this point. Who you choose to love; how you choose to present; the pronouns you feel most comfortable with, should not be and are not the most interesting things about a person, and they should not cause this amount of anguish.

For me the best thing anyone can do is ask oh what does he or she do? It has happened once that I can recall and it was so nice. It was instantly a way to know this person really won’t care and this is a safe space for me. For others it could be giving them a chance to tell you their pronouns before you make an assumption, these little actions make a world of difference I promise. And now over to you, tell me about your experiences and the things people could do to make your experiences of the beginning of a new year, or a new job better.

Hannah has spent the past 7 years working in ESL, first as a language assistant then class teacher in Chile, and more recently as the Director of Studies in the South of Spain.